What are Cyanobacteria & Cyanotoxins?

Described as the most successful group of microorganisms on earth, Cyanobacteria (commonly known as blue-green algae) are amongst our oldest living relatives and are responsible for modern life on earth and it’s origins⁽¹⁾. Appearing around 2.3-2.9 billion years ago, cyanobacteria play a vital role in our ecosystems; as the first producers of oxygen, fixing nitrogen for plant and soil function, and providing microscopic forage for both aquatic and terrestrial systems⁽²⁾. Contrary to their common name, ‘blue-green algae’ are neither always blue, nor are they true algae. Although they share a similar visual appearance, cyanobacteria and algae have significantly different cell structures, and therefore belong to separate domains. The majority of cyanobacteria appear as blue-green due to the abundance of the blue pigment, phycocyanin which is used as a photosynthetic aid, but certain species appear brown, red or pink due to a higher abundance of the pigment phycoerythrin ⁽⁴⁾. For example, the Red Sea gets its name from occasional appearances of Trichodesmium erythraeum ⁽⁵⁾, and African flamingos get their pink colour from eating Arthrospira platensis ⁽⁶⁾. 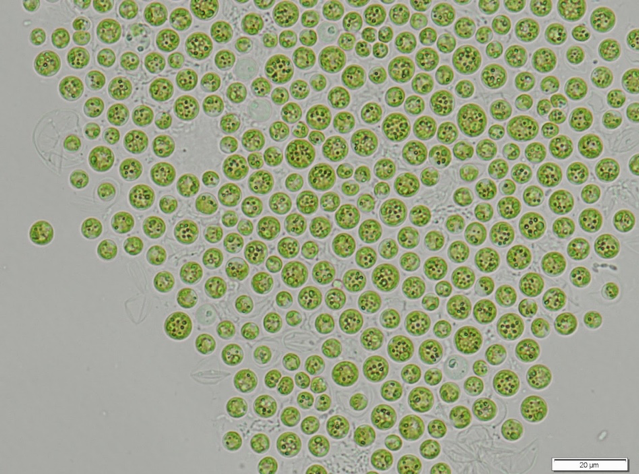 Why is it so important to test for Cyanobacteria?

Under suitable environmental conditions, where levels of available nutrients are high, cyanobacteria proliferate into large, high-density blooms which are often visible as discolorations of the water and/or the formation of scum. With a significantly high level of nutrients via eutrophication, cyanobacteria will consume and remove available oxygen in the water source, potentially resulting in an anoxic environment which is inhospitable to the resident flora and fauna.These booms have significant economic and social impacts as they cause significant disruption to drinking water supplies, aquaculture, agriculture, tourism and recreational activities. However, the most notable concern which drives many of these adverse impacts is the result of cyanotoxin production. 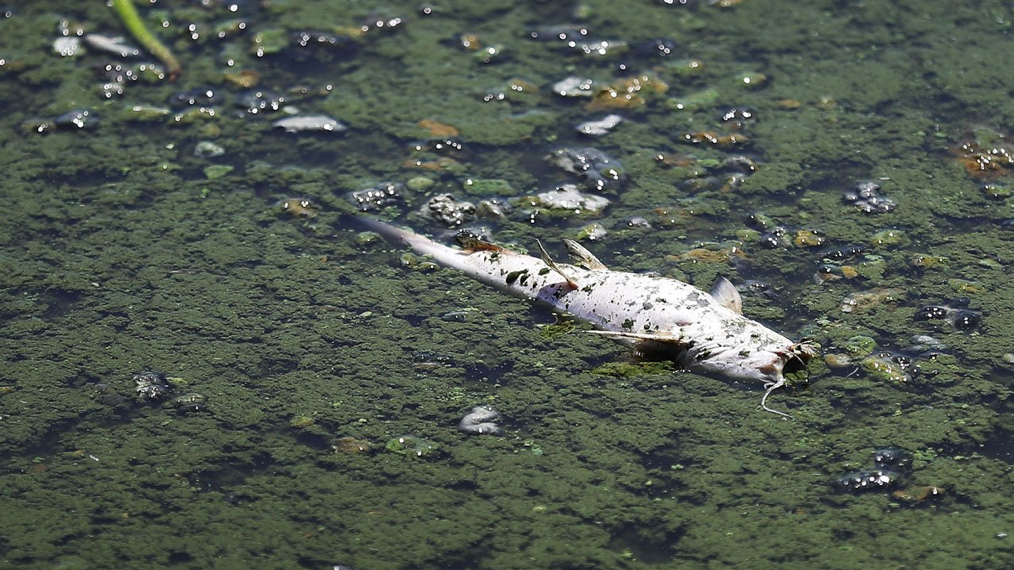 Left: Significant ecological and health impacts from the production of cyanotoxins ⁽⁸⁾. Cyanotoxins are compounds produced by the bacteria to assist in its’ cell function (metabolites), which are harmful to higher organisms. The molecular structure of these compounds is remarkably varied, which results in a broad range of adverse impacts on organisms and ecosystems alike ⁽⁹⁾.This article will focus predominantly on human health impacts of cyanotoxins, however the significant and potentially severe impacts of the toxins on ecosystems and water quality cannot be understated. Cyanobacterial populations may be dominated by a single species or be composed of a variety of species. Even within a single-species bloom, there may be a mixture of toxic and non-toxic strains (a specific genetic subgroup) ⁽¹⁰⁾. Although a large bloom of potential concern is visually evident, the presence of potentially toxic populations of cyanobacteria must be tested for as certain particularly potent strains do not require large blooms to impact water systems significantly.

Cyanotoxins fall into three overarching groups, with this grouping based on the chemical structure:

To further breakdown these three groups, we can look at the impact cyanotoxins have on cell types and organs within the body.  Due to these varied toxicity pathways, toxins have been further grouped in the following categories ⁽¹¹⁾.

Hepatotoxins, including microcystins and nodularins, have been identified as the most common form of cyanotoxins globally in fresh and brackish waters. Hepatotoxic compounds are comparatively large natural products and are characterised by their molecular structure which involves a specific arrangement of amino acids to form a ring-shaped compound (cyclic peptide) ⁽¹²⁾. This structure impacts the function of certain key players in cell function (protein phosphatases) and in some cases, enables hepatotoxins to be carried into tissues through hitching a ride on the same mechanism which uptakes nutrients and essential biochemicals. In mammals, this pathway largely results in the accumulation of hepatotoxins in the liver (although other organs and cell functions may be impacted additionally). As a result, acute doses can cause death via liver haemorrhage within a few hours of exposure ⁽¹³⁾.

Cyanotoxins are either excreted from the cell, or are contained within and released into the surrounding environment upon cell lysis (bursting of the cell due to environmental factors or cell death). This rate of cellular breakdown is increased under direct sunlight, at high environmental temperatures ⁽>⁴⁰°ᶜ⁾, and in extreme pH conditions ⁽<¹ ᵖᴴ ᵃⁿᵈ >⁹ ᵖᴴ⁾. Hepatotoxins primarily employ the latter strategy and retain produced toxins within the cell itself ⁽¹⁴⁾. In addition to their relatively high chemical stability and water solubility, this toxin containment has important implications regarding the environmental persistence and exposure incidence of hepatotoxins. Additionally, hepatotoxins have been shown to have bioaccumulative trophic properties, and can compound in concentrations progressing upwards through food webs. This is particularly hazardous in agricultural sectors, notably freshwater fishing industries where the potency of cyanotoxins can dramatically increase dependent on the species of fish ⁽¹⁵⁾.

Microcystins are the biggest and baddest character in regards to problematic cyanotoxins globally. The cyclic heptapeptide hepatotoxin is the most frequently occurring cyanotoxin in surface and drinking water ⁽ˢᵉᵉ ᶠᶦᵍ. ¹⁾. The primary cyanobacterial species responsible for producing the cyanotoxin microcystin, is Microcystis aeruginosa, however multiple genera of freshwater cyanobacteria produce this toxin (listed below)⁽¹⁶⁾. This species is widespread in Australia, and is common in lakes and reservoirs from the tropics to cold-temperate regions ⁽¹⁷⁾. Microcystin concentrations are generally correlated with cyanobacteria cell density, whereby the risk of exposure in increased with the intensity of the bloom.
Microcystins pose varied effects on mammals, depending on the route, level and mixture of components in the initial exposure. For example, an important distinction between terrestrial and aquatic exposure, is that aquatic organisms may be exposed to sub-lethal doses over an extended period, as opposed to doses typical in terrestrial systems ⁽¹⁸⁾. Listed below, are some of the additional effects microcystins pose and the references for further information; 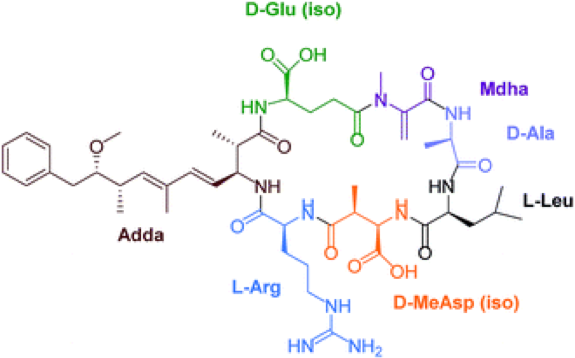 Humans are largely exposed through drinking, or partaking in activities directly in contact with contaminated water (eg: swimming). Other routes of human exposure include contaminated foods and nutritional supplements. In typical exposures of mammals to toxic blooms, low to mild exposure levels are associated with irritant effects, including inflammatory responses from the skin, respiratory system, and gastrointestinal system. Higher exposure levels (particularly from oral intake), results in liver damage or failure in particularly high doses, with early symptoms typically appearing within minutes to hours of exposure ⁽²³⁾.
The primary ingestion route of microcystins into the human body is via the oral route, with the toxin being absorbed as it passes through the small intestine, with some evidence to support partial absorption through the stomach when ingested.  The toxin then enters the blood stream, where it makes its way to the liver ⁽²⁴⁾.  Although, the liver is adversely affected with the ingestion of the toxin, the extensive research effort onto microcystins has identified adverse effects to the following organs.  It should be noted that the toxicological impacts were tested using rodents.

Nodularins are similar to microcystins in both structure and resulting hepatotoxic effects, with only five amino acids in their molecular structure (cyclic pentapeptitde) as opposed to the seven in microcystins (cyclic heptapeptide) ⁽ˢᵉᵉ ᶠᶦᵍ. ²⁾.  However, unlike Microcystins which are produced by a wide range of cyanobacterium, nodularins are produced primarily by Nodularia spumigena. Only 10 structural variants of Nodularin have been identified, compared to the 80 congeners of Microcystins described. Currently, nodularin has only been recorded in N. spumigena strains in Australia, the Baltic Sea, and New Zealand ⁽³⁷⁾. 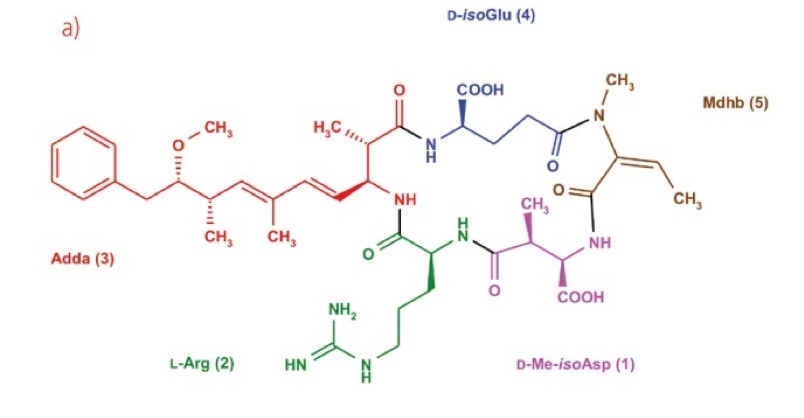 Fig. 2: Example of one structural assortment of the ring-shaped nodularin chemical structure, with characteristic amino acids coloured ⁽⁵⁷⁾
Nodularin acts upon protein phosphatases in the liver which can lead to cytoskeletal and liver damage in significant doses ⁽³⁸⁾. In addition, nodularins have been identified as carcinogens in rodents, acting as strong tumour promoters particularly within the liver ⁽³⁹⁾. The pathway of nodularin toxicity has been identified as similar to microystin uptake, entering orally and accumulating predominantly in the liver via the small intestine. Symptoms of nodularin toxicity have been closely related to Microcystin impacts, however the exact mechanisms of its toxicity (particularly in humans) still require further studies ⁽³⁴⁾. Listed below are some of the additional effects nodularins pose and the references for further information: 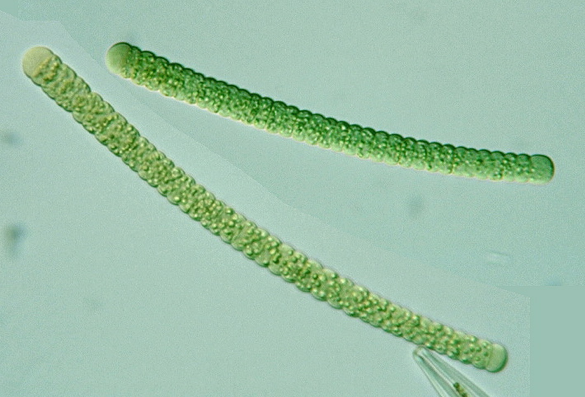 Nodularin exposure is not as widespread as microcystin, as it rarely occurs in freshwater that is commonly used for drinking purposes. Instead, nodularin populations largely occur in brackish/saline water bodies, including saline and coastal lakes. From this, major exposure to nodularins is through oral consumption, including the accidental swallowing of contaminated water during recreational activities and seafood consumption. There have been no confirmed incidents of human intoxication from nodularin, but there have been numerous reports of livestock deaths ⁽³⁴⁾
ABOUT 5STRANDS

5Strands Affordable Testing and this website do not make any medical diagnoses nor are they intended to be a substitute for professional medical advice. Always seek the advice of your doctor or other qualified healthcare provider if you have a medical condition or with any questions you may have regarding a medical symptom. If you have a medical emergency, please call your doctor or emergency services immediately. Our method of testing does not test for IgE or IgG mediated responses or true allergies. Since this type of response can be serious, you should seek the help of a medical professional or allergy specialist. Never disregard professional medical advice or delay in seeking it because of something you have read on this website. Reliance on any information provided by 5Strands Affordable Testing and this website is solely at your own risk. All of the information provided in and throughout this website is intended solely for general information and educational purposes and should not be relied upon for any particular diagnosis, treatment, or care. Some of the content on this website may be provided by third parties and we are not in a position to verify this content. We do not warrant that any such third party content is true, accurate, or complete. Statements made on this website have not been evaluated by the U.S. Food and Drug Administration or any other governmental regulatory body.

Can't subscribe you right now. Try later
Thank you for subscribing to the newsletter! We hope you enjoy shopping at 5Strands Affordable Testing